2. From Manitas de Plata to Kendji Girac, the music of Catalan gypsies in France 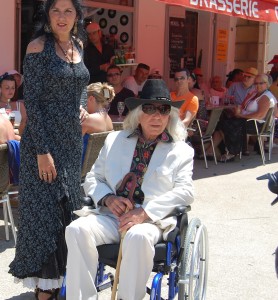 Ricard Baliardo, known as “Manitas de Plata” (“Little Hands of Silver”), died on 5 November last year in Montpellier. Only on the 25 May he had been strolling round the alleyways of Les-Saintes-Maries-de-la-Mer, where producer Deben Bhattacharya discovered him playing in the street in the early sixties. Critic, film-maker and writer Jean Cocteau launched him on the commercial circuit after hearing the recording. Right up to the end, Manitas remained loyal to the annual gypsy pilgrimage to the Camargue, although in his later years he was confined to a wheelchair, always impeccably dressed in pure white and with his trademark long, equally white hair.

French critics called him “Manitas de Plata, fingers of fire”. His performance in New York’s Carnegie Hall in 1965 made him an international star, selling 93 million records. No flamenco guitarist had ever achieved anything similar and, until Paco de Lucía became famous, he was the undisputed king of the genre on the international scene.

He was given his unusual stage name by the payos (non-gypsies), but to his family and friends he was always known as “Blum” (meaning ‘blond’). What his biographies don’t say about him is that Manitas de Plata was Catalan, a “Catalan gypsy”, like the tens of thousands of members of his community, scattered from Nice to Bordeaux and from Lyon to Saint-Gaudens. He was born in 1921 in Sète in an old green caravan acquired from the Boglione circus troupe, whose name was still emblazoned on the side. His father, Gustave Baliardo (from Gallardo) sold his ass to buy him a guitar when he was six years old, something his mother, Antoinette Farré, reproached him for all his life, as it meant she couldn’t travel for years.

“Blum” was the first Catalan gypsy in France to win fame as a musician, and it’s hardly surprising that latest success story Kendji Girac (his real surname is Maillé, from Malla), sees himself as his heir. Girac became famous in only a few months after winning The Voice on TF1 and he has just released his first album.

Between Manitas and Kendji Girac there have been many others, such as the group Tekameli (‘I love you’ in the Roussillon Caló language) from Perpignan, and El Mario from Nîmes, Blum’s own great-grandson. And of course, the Gipsy Kings, the French music group that performs on more international stages than any other. Three of the group’s founder members are sons of Manitas de Plata, and four are sons of Josep Reyes “the only gypsy in the world to have a square named after him” explains Luis Ruiz, his godson, who grew up with him in the neighbourhood of La Roquette d’Arles. Reyes, whose gypsy name is “Porc”, was Blum’s cousin. For years they played together in the Languedoc and Provence, as well as in New York, and Picasso even claimed that Manitas de Plata was a much greater artist than him.

The Gipsy Kings began as just Los Reyes (The Kings). Jesús Gimenez, a Catalan gypsy from Montauban who knew them, tells how Manitas played live for Queen Elizabeth II, “and the Queen said to him ‘listen, come to my castle and I’ll give you a horse’, and Blum replied in Caló piatsa, nanai, natse! He was sick of horses!”. “They made a lot of money” continues Jesús, “Porc drove around in a Rolls Royce, but they ended up broke; they had an autograph by Picasso and they sold it for peanuts”.

Catalan gypsies in France performed flamenco until Peret gave them the rumba. The Gipsy Kings threw two styles into the pot and pulled out the genre known nowadays as “gipsy”, their very own contribution to international music.

Pablo Reyes, of The Gispsy Kings

One of the leading characters in the story, Pablo Reyes, a founder member of the group, explains while he warms up by a street bonfire in Quai des Platanes, a Catalan gypsy neighbourhood in Arles: “We took a bit of rumba, a bit of flamenco, a bit of tango… and then we mixed it all up. Peret once said in a broadcast interview ‘I created the rumba, but the Gipsy Kings took it all over the world’. For us, Peret is a great man, a great man of rumba”.­

Catalan gypsies began migrating from the Empordà region to the Roussillon and to the Languedoc region in the late 18th century, and have maintained their culture over the years due to the constant influx of relatives from Catalonia and from Perpignan. Pablo tells the story of the community’s music. Before records with Spanish music arrived, in the early fifties “they were singing in Catalan, that they often call “gitano” (Gypsy), I mean. Back then having a party meant singing and hand clapping, that sort of thing”. And when Peret’s records came out, they started including rumba, “he was the one who invented the rumba. If we play rumba, it’s because of him; my father used to sing me songs by Rafael Farina, Manolo Caracol and Pepe Pinto. We used to listen to my father singing gypsy “tientos” and we went off and messed it all about, like Peret did, and made our own music”.

The majority of Catalan gypsy musicians in France sing in Spanish. Pablo explains: “we sing like that because Spanish words are beautiful. We can sing in Catalan or patois, well, goodness me… And we didn’t even know how to speak Spanish, we’d sing it but we couldn’t speak it”.

One of Manitas de Plata’s children, a musician also called Ricard, cracks a smile when I ask why they don’t sing in Catalan, and he improvises a quick tune, or folk song, in Catalan to show me why it wouldn’t work. It is, in fact, the Caló version of the comment made by Antoni de Bofarull to Milà i Fontanals in 1859 after the Jocs Florals restoration ceremony: “we’ve been speaking in Catalan for three hours and nobody laughed”.

So, the records were responsible for popularising the music now played by Catalan gypsies in France. First came flamenco or flamenco-style tunes. Antonio Heredia, an amateur musician and Spanish gypsy from Montpellier, and his Catalan wife, Paulette Bayardo, both agree with Pablo. They used to go to Spain and bring back records by Rafael Farina, Manolo Caracol and other flamenco performers who were popular in the fifties. Before then they had heard the music from their Spanish neighbours, with whom they shared juergues, or parties. Tonyo Serviole, from Montpellier and a Catalan through and through, born in Perpignan and raised in Barcelona, emphasises the point: “Flamenco is ours”.­  The Catalans started singing songs in the language they heard them performed in, whether they understood the lyrics or not; they sounded cool, it was music made by gypsies and it allowed them to express what they felt. When the rumba appeared, the same thing happened with Peret, El Pescaílla, Chacho del Piano and others…  It was music they adopted as their own. It also reached them in Spanish, leading to this language becoming the norm for songs. ­­

Nadia Gimenez, a friend of Antonio and Paulette, remembers that “old people sang in Catalan, before Peret’s time, when my granddad was young they sang: Munta’m a cavall, munta’m a cavall grossa vaca / ai que sí que sí, ai que no que no, ai la vull per jo”.­ Everyone joins in singing it with her, so it must have been popular.

Then Antonio takes up the song: “Remena, remena, remena…”, although Paulette sings “nena” here, but he sings “el bolero”. And he continues: “Meeè, meeè… el teu pare se’n va al cafè“. And they all join in with the chorus. Gypsies often joke about the lyrics remenar el buleru as bul is bottom in Caló.

The oldest singer that the Montpellier group of Calés can remember was Sargantana, “who played in a venue at Christmas and all the gypsies would go and watch” explains Paulette. Antonio thinks this was around 1958-1960 and that he performed songs by El Príncipe Gitano (the gypsy prince).

So Kendji, the new kid on the block, is not such a novelty after all. Or maybe he is, as he is from the other end of Occitania; he was born in Bergerac in 1996 and lives in Perigús, a long way from the Languedoc and Provençal region that saw the emergence of the gypsy genre. Maybe that’s why he doesn’t play gypsy music in Spanish, preferring to perform easy  listening numbers in French. What’s new about him is that he openly defends his Catalan identity. He did this by announcing that he would speak the language he shared with prime minister Manuel Valls, and this can be seen clearly in the recently released video clip promoting his album, for which he not only chose Barcelona as the film set, but also opens the video with a conversation in his mother tongue; the profile photo on his Facebook page is an image of the Catalan capital. None of his predecessors had ever done anything like that, but people from the new generation who grew up in Perpignan are doing it, like Col·lectiu Joan Pau Giné, D’ Juerga and Raft, who see themselves as a Catalan movement. The innovativeness lies in the fact that Kendji was born miles away from Catalonia, a place that most of the 2,500 Catalan gypsies living in the Dordogne have never heard of.