8. How do adoptees and the children of immigrants become Catalan?

“Does speaking Catalan allow children whose physical appearance differs from that of other Catalans to be accepted as Catalan?  Through what processes can they become Catalan?  In which situations is their Catalan-ness questioned, and in which might they themselves choose not to be Catalan?” I sought to answer these questions in an anthropological research project that I carried out in the Barcelona area from 2011 to 2015.[1] In the project I spent time with two sets of people who are negotiating access to Catalan-ness: immigrant families and transnationally adopted children. Children from both groups in theory have access to the Catalan language, either through the school or through both the school and the home. Do both sets of children have equal access to “counting” as Catalan?

This research project grew organically out of my previous research project. In that body of work, I try to understand what it means for Catalan to have become a public language again after its exclusion from the public realm during the Franco dictatorship.  I argue that while in many ways, Catalan is now seen as a neutral public language available for all to use, many speakers still view it as a language with strong ethnonational ties that keep it from acting as the taken-for-granted language of public life.

My interest in adoption began when participants in my first study as well as other friends and acquaintances in Catalonia began to adopt children from abroad. I realized that I was witnessing a major social phenomenon, one that would permit me to continue to ponder the Catalan language.  If Catalan is a public language and Catalan-ness is an identity available to all, adoptees should have the same opportunity to “become Catalan” as children born to Catalan families. The fact that the boom in international adoption coincided with the boom in immigration—often from the same countries—allowed me to design a comparative study that would tease apart place of origin, physical appearance, and home language and culture.

Kids imagining themselves at age 30

From summer 2011 to spring 2015, I used a range of anthropological techniques for collecting data, including spending time with participants informally, observing them, asking questions and conducting formal interviews and focus groups. Here I will describe a technique that I used to compare the experiences of adopted and immigrant children. I wanted to know about young people’s experience of Catalan-ness, but this is not a question one can easily ask directly, especially of children. Instead, I devised a focus group activity in which participants drew a response to a series of questions and then explained their drawing to their peers. This approach gave children the opportunity to express themselves in two different modes, providing a richer set of data and also accounting for the needs of children who might be more comfortable in one mode than the other. For logistical reasons, for the adopted children I conducted four small focus groups of three children each.[2] For the children from immigrant families, I conducted one larger focus group with eight children. The participants ranged in age from 9 to 16.

I first carried out the activity with adopted children. The children were all from upper-middle class families from a Catalan-speaking neighborhood of a city in the Barcelona metropolitan area and they lived their lives in Catalan. I brought colored pencils, markers and blank paper to the sessions. I invited the children to draw a picture that would answer the following questions, “When you are 30 years old…What will you be like? Where will you work? Where will you live? With whom will you live?  Anything else?” I let the children draw for 15 or 20 minutes, emphasizing that artistic skills were not important. Children drew themselves in professions such as SWAT team member, banker, hotel manager, computer programmer, nuclear engineer and musician, and many drew themselves large detached single-family homes. Then I asked the children to interview each other about their imagined life stories and how they had come to this point in their lives (the imagined age 30).

Example 1: self-portrait at the imagined age 30, by an adolescent girl adopted from China

In setting up the activity, I did not mention adoption, physical difference, the Catalan language, or Catalan-ness; I wanted to see if these things would come up on their own. They did not. Not a single child mentioned his or her own adoption as an important life event (or in fact, at all). The adopted children participating in this activity were of Chinese and Moroccan origin. People of Moroccan origin and people of Catalan origin are not necessarily distinguishable by their physical appearance, but people of Chinese origin obviously are. Still, nothing in the drawings of children adopted from China marked a phenotypic difference. For example, none of them depicted themselves with almond-shaped eyes and one child drew decidedly round eyes (see example 1). Relatedly, these children took the Catalan language and their Catalan-ness for granted. Catalan is the only language that they used for the activity and the fact that they had begun life as something other than Catalans never surfaced. Of course this is unsurprising, since they had all been adopted at a young age. Only when I specifically brought up the issue of adoption or physical difference did the children mention limits on their ability to receive social recognition as Catalans—for example a child of Moroccan origin with darker skin and curlier hair than is common in Catalonia reported being called the racial epithet “Moor” by classmates.

When carrying out the activity with the children of immigrant families, I modified the technique slightly to account for the fact that I didn’t know these children as well as the adopted kids and I needed information about their current lives. I had them divide their paper down the middle. On the left they drew themselves now and on the right at age 30. The participants came from working and lower-middle class families from Morocco and Pakistan. Some of the children had been born in Barcelona, while others had immigrated. 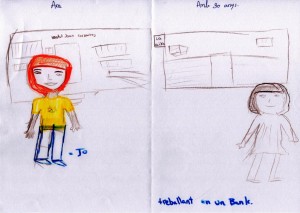 Example 2: self-portrait now and at the imagined age 30, by an adolescent girl immigrating from Pakistan

As with the adoptees, these participants did not mark themselves as different in their drawings, with the exception of a teenage girl who drew herself wearing a headscarf (see example 2). Their aspirations for themselves at age 30 were also quite similar; professions included included FBI/Guardia Civil, marine biologist, social worker and banker—the children did not see themselves as emulating their parents’ roles as grocery owners, taxi drivers, cleaners and housewives. Catalan was not taken for granted among these young people. Their drawings and speech showed a range of uses, with some of the kids using almost exclusively Castilian, one using exclusively in Catalan (because he had arrived two years previously and had not yet learned Castilian), and some speaking both languages comfortably.

At the end of the session, I asked about advantages and disadvantages of having parents from elsewhere. Most kids pointed to advantages, such as getting to travel and know other cultures. The only disadvantage was given by a 10-year-old girl who complained that her mother asked her to do her Castilian homework for her! When asked, the kids reported instances of racism—from being called “Moor” to being told to “go back to your country.” When asked if he felt Catalan, a 14-year-boy born in Morocco who immigrated to Spain at age five said he felt Moroccan but not Spanish or Catalan. A girl of Moroccan origin born in Catalonia said she felt Catalan and a little bit Moroccan, but not Spanish. Other kids reported feeling all three. And a teenage girl who was born in Pakistan and moved only recently to Catalonia Pakistani and not Catalan, but then added, “una mica sí perquè sé parlar el català.”

In fact, when I asked explicitly, “Què vol dir ser català?,” the teenage daughter of a Moroccan mother and a Spanish father responded, “Parlar català.” When I asked if anyone had helped them to feel Catalan, the ten-year-old Moroccan girl responded, “Sí, a l’ escola ensenyant-nos a escriure el català.” These kids clearly see becoming Catalan as a process and identify access to the Catalan language as key. These data also point to the apparent success of the public school system: the kids seem to identify it as an institution that facilitates rather than impedes their ability to belong. Also, their aspiration to middle-class professions indicates they believe (correctly or incorrectly?) that they have a chance at upward mobility. The adopted kids, on the other hand, are not “becoming Catalan.” They take the Catalan language and their Catalan-ness for granted, although they do experience instances of racism and privately some of their parents shared their worries about what will happen to their children when they leave the protection of their schools and neighborhoods and engage with the world of strangers.

What I have described here are early findings and observations. As I undertake a more detailed analysis, it will be important to pay attention to nuances related to gender, country of origin, social class and locality. My hope is that this analysis will help social scientists think about the relationship between language, difference and belonging in Catalonia and beyond.

[1] Of these children, three were non-adopted friends or siblings of the adoptees. The present analysis focuses on the responses of the nine adoptees.

[2] This research was supported by summer funding and a research leave from Goucher College, as well as a grant from the Reed Foundation’s Ruth Landes Memorial Research Fund.