15. Being Visible: Processions, Celebrations and Religious Protests in the Street

Some decades ago it looked as though religion was destined to become a residual practice in 21st century Catalonia. This was not a hasty verdict. Surveys showed that the Catholic Church was losing believers and worshippers at an alarming rate, and it was becoming an increasingly discredited institution in the Catalan context. Whereas in 1980 people who thought of themselves as Catholic made up nearly 80% of the population, by 2015 this figure was closer to 52%. Plus, out of this number, less than half said they were non-practising, meaning that although they were people who described themselves as Catholic they hardly ever attended mass or other forms of worship.

However, not all religious faiths are losing followers in our country, quite the opposite. In the last few decades, religious minorities have been gaining ground and nowadays, more than 15% of Catalans say they are members of a religious minority, with Islam, Protestantism, Buddhism and Orthodox Christianity being the faiths that attract the largest numbers of people (Baròmetre, 2014).  It is estimated that, at present, there are more than 1,360 places of religious minority worship in Catalonia (ISOR, 2014). Evangelical churches, Sikh Gurdwaras, Buddhist monasteries, Orthodox churches and Hindu communities are just some of the religious centres that have been set up in recent years and that have contributed to diversifying the religious map of Catalonia. Nevertheless, despite this remarkable growth, most places of worship remain tucked away in the urban landscape, camouflaged amongst industrial warehouses, commercial premises or in spaces lent temporarily by the administration or by social organisations. In Catalonia, the architectural invisibility of places of worship stands in contrast with the increase in all kinds of religious activities in the streets, including processions, religious festivals, open-air prayers and concerts of religious music that year after year are becoming more visible in the public domain.

In 2015, the ISOR sociology research group embarked on a project to explore the growth of this type of activity in the metropolitan area of Barcelona. The project was entitled “Religious Expressions in Urban Space. Negotiations, tensions and opportunities surrounding the visibility of religious diversity in the Catalan public domain”. (“Expressions Religioses a l’Espai Urbà. Negociacions, tensions i oportunitats entorn la visibilitat de la diversitat religiosa a l’espai públic català”)[1] and focuses on analysing the (in)visibility of activities carried out, the bureaucratic and political processes that communities have to go through to hold these activities and the negotiations that take place with the local community and the audience they target. The research was designed following a case study methodology and five studies were completed, each one focusing on a single religious faith: Catholicism, Islam, Protestantism, Buddhism and Sikhism.[2]

‘Why do religious communities take to the streets?’

Celebrating and/or commemorating significant dates in a community’s religious calendar is one of main reasons for organising activities in the public space. An example of this is the Shiite Muslim community in Barcelona, which has been holding the Ashura procession in the Rivera district every year since 2006. The aim is to publicly celebrate the death of Hussein Ibn Ali, grandson of the prophet Mohammed, and remember his suffering simultaneously all over the world. Memories of death also colour the Catholic procession organised by the brotherhood of ‘Germandat del Gran Poder i l’Esperança Macarena’ every Good Friday and that goes along the Ramblas in Barcelona as well as through the city’s historic quarter. The commemoration serves to collectively remember the basic origins of the faith and to reactivate emotional bonds with the community of believers. Both in the Ashura and in the Catholic procession, the ritualised staging of pain is a key element that transports the participants emotionally. In the case of the Ashura the ‘matam’ ritual structures the pace of the procession; the recitation of rhythmic chants that rise and fall in volume in a loop, while participants beat their chests[3]. In the Catholic procession, the passage of the holy images of Christ and the Virgin of the Macarena are what structure and stage the ritual. The sight of the images unlocks the emotions of the people taking part and triggers a public ovation, as people with outstretched hands literally try to touch the images, amidst cries of “Beautiful, beautiful, you’re the most beautiful! Long live the Virgin of the Macarena!” (field material), demonstrating the complementarity between images, ritual high spirits and emotions.

The reason for taking to the street is not always linked to the expression of pain. For example, every year, the Sikh community holds the Guru Nanak festival in Barcelona and all over the world, to commemorate the birth of the founder of Sikhism. This festivity remembers the joy of the religion’s origins and involves men, women and children from the community, who walk in procession through the streets in the centre of Barcelona. The procession ends with a community meal to which everyone is invited and that is intended to symbolise the hospitality of Sikhism. In mid-April, the Sikh community also holds Baisakhi or the harvest festival, which celebrates the founding of Khalsa, the institution that baptised Sikhs all belong to. As one of the community members explains: “Baisakhi is the baptism festival, commemorating the creation of Khalsa. Khalsa means a pure Sikh, when a Sikh decides they want to be Khalsa, we hold this festival. (…) From this moment onwards they have to follow a series of rules like not cutting their hair or wearing a wooden comb…”.

Sometimes the reason why communities take to the streets is also because they want to complete a spiritual or religious ritual. The collective baptisms that some Protestant churches hold on Barceloneta beach also show this desire to take ritual into the public domain, away from the centre of worship.

All the activities we have described up to this point are largely aimed at the members of religious communities. In contrast, some activities are intended to show the faith of those involved to the heterogeneous audience that gathers in city streets and squares. We are referring, for example, to the so-called “evangelical campaigns” organised by Protestant communities in parks and squares, in the hope of attracting new followers, or handing out leaflets, brochures and magazines to publicise their faith. However, organisers of this kind of event frequently come up against reluctance from public authorities, who disapprove of the use of public space for what could be regarded as religious canvassing. The boundary between publicising one’s own faith and what is regarded in a derogatory sense as intrusive religious crusading is very fragile and often causes controversy. What some see as simply being part of religious freedom and the right to express oneself freely is regarded by others as a proselytizing act that should be restricted in our society.  The problem is that the line between both these views is often difficult to determine using objective criteria and it is then that social and cultural biases come into play, tending to prejudice communities that are little known, stigmatised or recently established.

The latest way of using public space by religious communities is the protest demonstration. The desire to make unrest visible is what pushes them into organising an event outside the centre of worship. In a global and interconnected world like ours, these protests are frequently held in response to events happening far away from our borders. This is the case, for example, of the protest held by Sikhs in October 2015 in the Rambla del Raval to show their unrest at the attacks carried out against the holy book –’Sri Guru Granth Sahib’– in their home land, the Punjab in India. We could also point to protests held by the Muslim community on issues such as the controversy about the publication of the caricatures of the prophet Mohammed and other similar matters. This kind of event reinforces transnational bonds and the creation of a community conscience in the diaspora.

‘The importance of place: social recognition and the public space’

Being able to make oneself seen, being visible to other citizens is one of the growing demands of religious communities. They lay claim to their “right to the city”. The spokesperson for the Sikh community told us that for them it is very important to go along the Rambla. They know it is difficult because the area is very busy with traffic but, as they explained, “the community has this wish, to be able to walk along the Ramblas, so that people can see and meet us”. They also point to an unfair situation that allows the Catholic procession to parade along the Ramblas, with permission to cross the city’s most important roads.  In the spirit of goodwill, they say that they understand Catholicism has a long tradition in the city but they also point out that being more recent arrivals should not make them second-class citizens. After much insistence, the Sikhs have managed to obtain permission for their procession to cross the Ramblas, although they have not been authorised to actually take it along this street. For the Shiite Muslim community it is also important to be able to hold their festival in one of the city’s iconic spots, the Arc de Triomf. It is a symbolic issue and part of their desire to be recognised. In this case, the community has expressed its strong disagreement with the proposal that they move the Ashura procession to a closed site, like a pavilion, or to somewhere on the outskirts of the city. As citizens of Barcelona they demand to be able to make their religious and cultural beliefs visible and not have to hide away. There is also another reason for their refusal to move to a peripheral location: they want to be acknowledged on global networks, like Twitter, Facebook and Instagram, as citizens of Barcelona, and they need an iconic landmark to be in the photos so the city can be easily identifiable for people watching from faraway locations. They are citizens of Barcelona, but they are also travellers in a globalised world with networks of friends, family and acquaintances across the planet, and they want them all to be part of this gathering.

The separation between the sacred and the profane space is an issue common to most religions. However, the border between one dimension and the other is often blurred and expression emerge that take place on the periphery. Religious activities out on the street are frequently characterised by having a hybrid relationship with the sacred and the profane space: they are expressions of sacredness produced in a space defined as profane. In our country, historically speaking, the majority of religious expressions on the street were Catholic and part of the Catholic Church’s public ritual. But times have changed and the religious landscape has been transformed over recent decades. Religious diversity has become very important and minority groups demand their right to take to the streets and make themselves visible to other citizens. 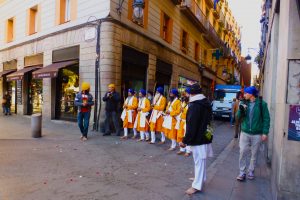 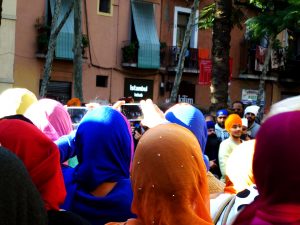 [2] In all cases, one or two rituals were chosen out of all those organised in the street by religious communities, and a qualitative methodology was followed consisting of ethnographic observation, collection of audio-visual material and semi-structured interviews with various people involved in the community events.

[3] Self-flagellation is practised in some other countries but this is not the case in Barcelona.