Last May, the main results of the Survey of Language Use in Alghero 2015 were presented (report available at:

In this note, I discuss some of the 2015 survey data that provide information pertaining to the (possible) future of Algherese.

During the analysis of the 2004 survey the difficulty of defining in a clear way, a posteriori, the level of linguistic competence in the four main skills (listening, speaking, reading, writing) based on dichotomous questions such as “Do you know how to speak Algherese?” emerged. (See: <http://llengua.gencat.cat/permalink/be774a00-5382-11e4-8f3f-000c29cdf219, especially pp. 35-37). For this reason, gradated questions were added to the definition of the research protocol for the 2015 survey to be able to qualify different competency levels according to certain typical communicative situations encountered in Alghero. In addition, a prior definition of the minimum threshold in order to establish whether the informant in question has or does not have active competence in the skill under consideration was created. For example, in the case of “knowing how to speak,” a minimum threshold was applied of the ability to carry out an everyday conversation in Algherese without too much difficulty. This was an adaptation of a criterion already used by the European Commission to investigate the linguistic knowledge of its citizens. If we make comparisons between the values from the dichotomous and the gradated questions, we find obvious discrepancies in the results. 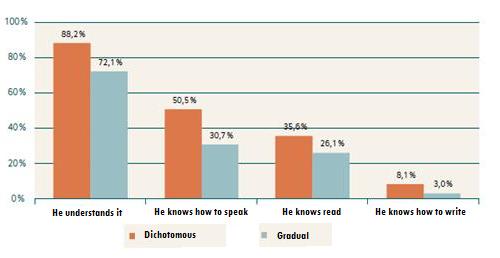 At first glance, it seems that the informants tend to overestimate their own Algherese language skills when they are asked a closed question such as “Do you understand Algherese? Yes/No.” In this regard, a more thorough comparative analysis between gradated and dichotomous questions regarding knowing how to speak reveals how the question “Do you know how to speak Algherese?” also received an affirmative response from the 19.6% of interviewees who speak it with difficulty and are normally not able to start and finish a conversation in that language.

The people of Alghero’s opinions on their own language

One possible key to interpreting the unexpectedly high positive percentages of responses to dichotomous questions is that users attach a positive value to knowledge of Algherese. This possibility was further confirmed by questions about linguistic opinions, which indicated that the resident population is strongly in favour (92.3%) of the introduction of Algherese and Sardinia’s other languages in the Sardinian school curriculum. In addition, a large majority (77.2%) would like Algherese to be the main or secondary language used in everyday activities. Moreover, the prejudice that holds that knowledge of local languages can cause problems when it comes to learning Italian and foreign languages, which was very strong even a few years ago, is now rejected by 86.8% of Algherese people.

The future of the language

The chart provides a stylized representation of the vitality of Algherese from a diachronic perspective. The green and red lines indicate the percentage of residents of Alghero who have Algherese, respectively, as a first language and as an acquired one.

If it were possible to take a snapshot of Algherese’s state of health on any one day of its history, we would note that this language was not only the L1 (mother tongue) of the majority of the population, but also that it had a strong ability to attract new speakers (vertical arrows) and transformed allophone newcomers into Catalan speakers in a relatively short time period. Although the state languages (Spanish and, later, Italian) exercised a strong attraction on Alghero’s elite—who nevertheless continued using Catalan in local-level relations—our language’s capacity for assimilation was still very strong until the early fifties of the previous century, a time when, as elderly people recall, “practically everyone spoke Algherese.” Since that period, however, a twofold factor has caused a significant fall in speakers. On the one hand, the people of Alghero have stopped passing on the language to their children, creating a reduction in native speakers of Catalan. And on the other hand, newcomers have not felt the need to integrate linguistically, given that Italian fulfils all communicative functions well. In this regard, the chart shows how Algherese has been transformed into a minority language in the space of only two/three generations (1950≃ — 2015).

Another aspect that does not bode well for the future of our language is the increasingly obvious progression of the process of intergenerational linguistic interruption, given that only 3.6% of the youngest parents use Algherese with their children as a primary language.

The data discussed in this note make it clear that today Algherese is a language that has a strong drawing power, given that the percentage of residents who would like to know and use this language in a significant way (77.2%) is more than double the percentage of people who know how to speak it fluently (30.7%) In addition, Algherese society exhibits a desire to incorporate the language in educational institutions in a structured way, overcoming the tendency of our educational system to conduct activities in Catalan (and Sardinian) sporadically and without long-term planning.

On the other hand, the “strong drawing power” mentioned in the preceding paragraph does not seems to be in itself sufficient to transform the people of Alghero’s positive attitude towards their own language into a proactive attitude, given that the tendency to use Italian with the new generations is becoming increasingly apparent.