4. The Emmaus movement: A common mission in different languages 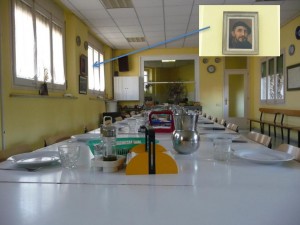 My first contact with the Emmaus Barcelona community was at a communal dining room bustling with conversations in different languages among over thirty people from different social backgrounds and geographical origins sitting there. I immediately could not help but wonder what brought all those seemingly diverse people together around that table. Unbeknownst to me, the answer lay in front of me: the painting of the Abbé Pierre (nickname given to Henri Grouès, 1912-2007) presiding over us on the wall. This image symbolizes the origins of the international solidarity movement that this French working priest founded, together with Lucie Coutaz and Georges Legay, in a similar community of rag pickers on the outskirts of post-war Paris.

During my visit to the first ever Emmaus community in Neuilly-Plaisance a year later, everything looked familiar there, not only because of the Abbé Pierre pictures and quotes but also because of the communitarian organization and the social diversity among the “companions” that I met there. All over the world, Emmaus is a social movement dedicated to the (re)insertion of marginalized people in live-in communities doing recycling and recovery work to finance solidarity projects, both locally and abroad. My subsequent visits to other communities in England further confirmed these shared aspects among local communities situated in different socio-political and linguistic contexts. How do you create a common identity within the Emmaus movement across borders?

I found answers to my initial question about what unites people at the Emmaus Barcelona table, and at many other similar tables all over the world, in what I had been observing from the first day: daily social interaction. If anybody wants to get to know a community or the Emmaus movement, they are always invited to lunch and, in actual facts, the drapaires d’Emmaús present themselves in a local press article in this light: “Qui vulgui conèixer Emmaús que vingui a dinar” [Whoever wants to get to know Emmaus, come have lunch] (2006). Social interaction, as for instance in communal meals and assemblies, is central to the creation and maintenance of a feeling of belonging to “the community” and to the larger Emmaus movement. On the one hand, the encounter with others in this live-in and working community embodies the central value of solidarity through the creation of affective bonds among the people who form part of it. On the other, established members tell well-known stories about the Emmaus movement and the Abbé Pierre to visitors and newcomers.

The founding story of Emmaus: “A reason to live”

The central aspect that articulates local Emmaus communities is the founding story of the movement, which narrates the first encounter between the Abbé Pierre, a Resistance hero and French parliamentarian born to a bourgeois family, and Georges Legay, a former prisoner who tried to commit suicide and decided to help the Abbé Pierre build houses for unprivileged families. This story about encounter and solidarity with others inspired the Universal Manifesto of the Emmaus movement, adopted in 1969, as a central text that fixes the shared mission of all Emmaus groups  since the beginning of the movement. This institutional text circulates in different translations into languages such as Euskara, Italian or German.

Our name, “Emmaus”, comes from the name of a village in Palestine where despair was transformed into hope. For all, believers and non-believers alike, this name evokes our shared conviction that only love can unite us and allow us to move forward together. The Emmaus Movement was created in November 1949 when men who had become aware of their privileged situation and social responsibilities in the face of injustice and men who no longer had any reason to live crossed paths and decided to combine forces and take action together to help each other and come to the aid of those who were suffering, in the belief that it is by saving others that you yourself are saved. To this end, the Communities were set up, working to live and give. Groups of friends and volunteers were also set up to continue the struggle in the private and public arena.

(Extract from the Manifesto Preamble, taken from the Emmaus International  webpage < http://www.emmaus-international.org/>)

The founding story links the encounter between people from different social backgrounds with personal transformation that brings about new “reasons to live”. This shared story, which is (re)told in communitarian spaces and adopted in institutional texts at the communities, shapes the biographical narratives that the Emmaus “companions” tell. In these personal narratives, we find the same encounter and self-transformation motifs, often expressed with the same words as in the founding story. As a token, a Catalan “companion” in the Barcelona community, with higher education and from a privileged family, explains her affiliation to it within this frame: “per què estic aquí?, perquè m’he volgut quedar a Emmaús, primer vaig venir per desesperació perquè no sabia on posar-me, i después va arribar un moment que vaig dir, però molt aviat, eh?, al cap d’uns mesos vaig dir, pues, la meva vida ja passa per Emmaús, i crec que ho vaig dir amb aquestes mateixes paraules i continua passant-hi, vull dir perquè perquè he trobat un motiu per viure, o per seguir vivint” [why am I here?, because I wanted to stay in Emmaus, first I came because of desperation because I did not know where to go, and later it got to a point when I said, but very early on, huh?, after some months I said, so, my life goes through Emmaus, and I think that I said it with these same words and it still goes through it, I mean because I have found a reason to live, or to continue living].

The version of this history in the Manifesto, as you will recall, calls for the creation of communities among diverse people surrounded by groups of volunteers. In practice, all the communities have socio-communicative practices in which the Emmaus encounter is (re)told and embodied, as in the shared table that opened this note or in the reflexive assemblies among the members. When asked about what unites different people in the movement, an Emmaus “companion” from a community situated in an indigenous area in Peru, who was then working in Emmaus Pamplona, answered: “Pienso que nos une el hecho de que nuestra vida se siga repitiendo aquel primer encuentro entre el Abbé Pierre y Georges” [I think that what unites us, the fact that our life continues to repeat that first encounter between the Abbé Pierre and Georges]. What is interesting is that this encounter is repeated in different languages depending on the sociolinguistic context and the linguistic repertoire of speakers who participate in it, because geographical mobility has greatly changed the make-up of local communities at the turn of the century.

Multilingual communication in the Emmaus network

The network of local groups belonging to the Emmaus movement, currently with more than 400 groups in over 37 nation-states, is very heterogeneous and, as a consequence, multilingual. As a social movement, Emmaus does not have a single language of communication despite the existence of three official languages (adopted in 1971): French, Spanish and English, in order of importance within the movement. The articulation among the different local communities is based on the repetition and appropriation of the story about the founding encounter thanks to translations from the three official languages, which do not have the same value across contexts, and to “mediators” with multilingual repertoires who liase with the broader movement. As in the case of the recent Occupy movement, the common objective rests on discourses and stories that circulate in different linguistic varieties. Communication among local communities and individual members requires a shared language, whose lack can complicate the connections. In addition, the three official languages in Emmaus seem to draw three broad networks within the movement on the basis of a shared language for communication.

For instance, the community that I investigated in Barcelona orients its solidarity mission towards Central and South America, especially through grassroots Christian movements, and looks up to France as the cradle of the movement. Therefore, some old-timers act as “mediators” in French and many adopt a vision that does not make language a problem to communicate, since they resort to “francés macarrónico” [roughly, gibberish French] and “mix” it with Catalan and Castilian Spanish. In assemblies with Emmaus groups from Euskal Herria and Latin America, which are immersed in revitalization movements of indigenous communities, the common language was Spanish. On the other hand, the London community that I also investigated collaborates with other communities in the UK, in addition to some weak links with Northern European ones that have fluent L2 English speakers- which my informants define as “English-friendly” in contraposition to French ones. By and large, multilingualism in London is constructed as a problem to communicate and, during my fieldwork, this community did not have any projects with communities outside the British Isles. Emmaus London constructs its international mission and belonging on the basis of translations from French done by Emmaus UK, the federation of all communities in this nation-state.

In Emmaus Barcelona, only two “companions” can speak English even though some external volunteers and temporary residents (especially migrants) also speak it. Thus, they have not established direct relationships with English-speaking communities or those that have English as a bridging language with the movement.  In spite of this, one of the youngest “companions”, an Amazigh man from Southern Morocco in his thirties, studies English and back in 2012, he wanted to set up an exchange with an Emmaus community in England. Despite the lack of a common language with his Emmaus community of origin, Massin remarks that they share the same principles and objectives as members of the same social movement.

I’m thinking to visit Emmaus London in England for much reasons, in the first, I’m living in a community of Emmaus Barcelona, then I’m sure that they have the same principles and objectives, but each one operate different, in the second, I’m interesting to make relationship with England’s mans to know how is their vision of the life, in the third, i’m looking forwards to learn and practice English language.

The exchange of “companions” between local communities within the Emmaus network illuminates a new type of international mobility —different from tourism, economic migration, political asylum or academic study — which also requires multilingual repertoires and learning new languages, such as English. At the same time, new migrations in the era of globalization have had an impact on the make-up of local groups belonging to a movement of international solidarity, as this Amazigh “companion” in Barcelona exemplifies as well.

The shared table at Emmaus is a symbol of encounter both in the story about the origins of the movement and in the globalized world in which we live. Multilingualism, and new speakers of Catalan, at the table of Emmaus Barcelona show the generational change and the constant evolution in a postwar social movement.

Note: This note is based upon the doctoral thesis Emmaus as a transnational imagined community: Language, interdiscursivity and stratification in a social movement (2014, Universitat Autònoma de Barcelona), available at <http://www.tdx.cat/handle/10803/285359>.